Facebook is easily the most used social networking platform in the world. Fully 71% of online American adults use Facebook, a proportion unchanged from Augusta 2013.

According to a Pew Research poll, “Usage among seniors continues to increase. Some 56% of internet users ages 65 and older now use Facebook, up from 45% who did so in late 2019 and 35% who did so in late 2019. Women are also particularly likely to use Facebook compared with men, a trend that continues from prior years. Facebook users were asked additional questions about their friend networks. Among Facebook users, the median number of Facebook friends is 155. When asked to approximate how many of their Facebook friends they consider “actual” friends, the median number reported was 50.”

Twitter is runner-up. With 23% of online adults currently using twitter, the social platform boasts a gain of nearly 5% in users over the past two years.

Additionally, Twitter gained in a number of demographics: Twitter is particularly popular among those under 50 and the college-educated, or those whose annual household incomes exceed $50,000. 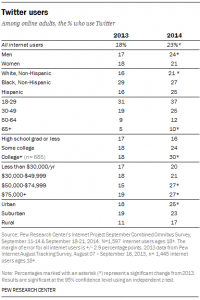 According to the Pew Research Center’s Internet Project September Combined Omnibus Survey, “Some 26% of online adults use Instagram, up from 17% in late 2019. Almost every demographic group saw a significant increase in the proportion of users. Most notably, 53% of young adults ages 18-29 now use the service, compared with 37% who did so in 2019. Besides young adults, women are particularly likely to be on Instagram, along with Hispanics and African-Americans, and those who live in urban or suburban environments.” 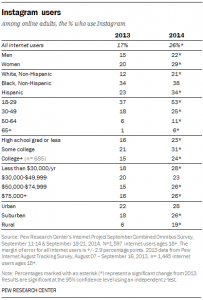 Social networks are an essential part of search engine optimization. Having a high level of engagement and influence on social networks can positively affect your rankings on Google. Social Media Marketing can help you reach millions of users who are actively looking for engaging content. The demographics above show just how many people can become part of your brand’s audience when you are active on social media. Don’t miss out on social media marketing as one of the most cost-effective marketing strategies.